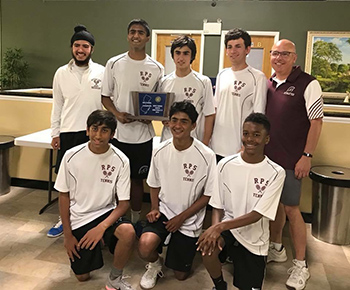 Boys Tennis at Rutgers Prep embraces the motto “Di Da Fu We,” a Belizean creole saying that means “This is For Us.” In a highly competitive and mostly individual sport, our team focuses on pushing and supporting each other during matches and during practice. This intensity has manifested itself in 5 consecutive Skyland Valley Division championships. Every player on the team last year earned either first or second all conference titles.

he team has won acknowledgement as Group B sectional runners up twice, a Group B South championship, and Group B Runner Up in the state team tournament. In addition, we have had teams and players win championships at 1st singles, 2nd singles, 1st doubles, and 2nd doubles in the NJISAA tournament in which the team has placed 2nd overall in each of the last two years.]

Coach Mitchell has spent almost 20 years at Rutgers Prep, many of those years spent coaching middle school tennis, and he has been the head Varsity Boys Tennis coach for the last 4 years. Coach Miller has been around New Jersey tennis for the better part of 40 years, is approaching 1,000 career wins, and earned recognition this year from the NJSIAA for his contributions to the success of tennis in New Jersey.